New York Times Article on the Mutter Museum's Gretchen Worden, "A Curator's Tastes Were All Too Human"

Today's NYT has an article on Gretchen Worden, the late curator of the Mutter Museum, a famous collection of medical oddities in Philadelphia. She and the Museum were on the Letterman Show a few times. When I met her, Gretchen was a tall redhead with a cackling laugh. She once let me into the Museum after hours to look around and to see the collection in the room that now bears her name. In gratitude, I sent her a photograph of Thomas Dent Mutter's tomb, which coincidently was right up the hill from me. From the article:

This, her friends agree, is how she would want to be remembered: her own Gretchen Worden Room at the Mutter Museum, the College of Physicians of Philadelphia's collection of medical specimens and instruments. It's a small room, in a former storage area Ms. Worden jokingly referred to as "the tumor room." But it has been handsomely fitted out with display cases of polished wood and glass, filled with the kinds of spectacularly grotesque anatomical oddities Ms. Worden spent her adult life explicating as the museum's director and tireless promoter.

There are jars of preserved human kidneys and livers, and a man's skull so eaten away by tertiary syphilis that it looks like pounded rock. There are dried severed hands shiny as lacquered wood, showing their veins like leaves; a distended ovary larger than a soccer ball; spines and leg bones so twisted by rickets they're painful just to see; the skeleton of a dwarf who stood 3 feet 6 inches small, next to that of a giant who towered seven and a half feet. And "Jim and Joe," the green-tinged corpse of a two-headed baby, sleeping in a bath of formaldehyde.

A roomful of diseased organs and genetic monsters would seem a strange memorial only to those who didn't know Ms. Worden... 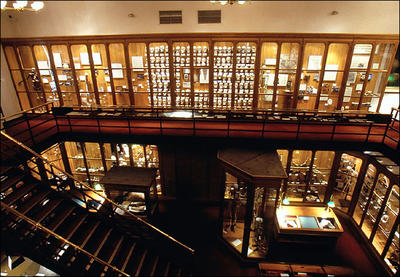