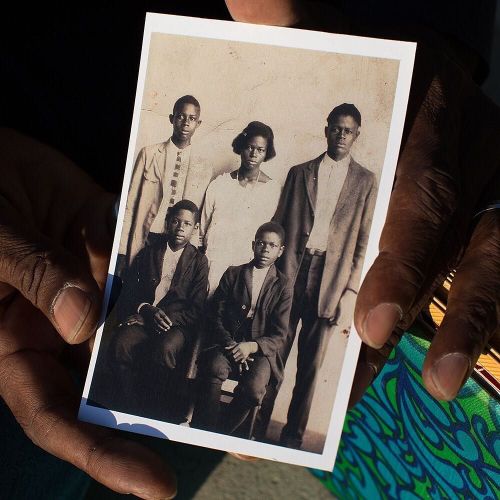 "When Orlando Ward, 55, read a @nytimes article about 2 Jesuit priests who sold 272 slaves to a Louisiana slave owner, he had to take time to process what he was reading. The priests ran what in 1838 was the country's top Catholic university, now @georgetownuniversity. Among the people sold were several of Orlando's ancestors. "I remember, when I was younger, I would ask my grandfather Remus Hill where we were from, and he would say Maringouin," Orlando said, referring to the location of a cotton plantation in Louisiana. "When I asked, 'What about before that?' he would get hesitant and very solemn and say, 'I could take you back as far as Maryland, but it would make your toes curl.' " Orlando's grandfather, Remus Hill, is pictured in the lower right of this photo that Orlando shared with @nytimes photographer @malmeidapix. This #nytweekender, we'll be sharing stories from more descendants of slaves sold to keep Georgetown afloat." By nytimes on Instagram.