THIS WEEK in the MEDICAL BLOGOSPHERE: GRAND ROUNDS 2.06

The population of blogs on the internet has exploded. At last count, Technorati estimates there are at least 19 million blogs in existence, and this number is doubling every 5 months. While some blogs are automated producers of spam (with their own unusual physiology), the majority of blogs are written regularly by real people with real things to say.

The subset of medical blogs, the "medical blogosphere," has been created by a growing number of physicians, nurses, students, patients, scientists, social workers, administrators, engineers, IT professionals, consultants, and many other people involved in health care. One way of seeing at a glance what people are talking about is the Medical Blogosphere Tag Cloud, an abstraction of the most common keywords from medical blogs.

Grand Rounds, which is hosted each week by a rotating group of bloggers, is the easiest way to stay up to date with the best writing in medical blogs. Grand Rounds shares the same purpose as the annotated table of contents in printed medical journals like the NEJM and the Annals of Internal Medicine: it introduces noteworthy writing and encourages further reading.

I have the pleasure of hosting Grand Rounds this week. Here are the blogs:

Doctor Stories
As a psychiatrist, how do you terminate a relationship with someone who is dying, and you can't help them, and your shift in the hospital is over?
(See Intueri.)

Caring for a patient who is over 800 pounds presents challenges.
(See Chronicles of a Medical Mad House.)

What is Web 2.0?
The term Web 2.0 refers to a constantly evolving series of tools designed to put more of your information on the web under your own control, rather then on your own personal computer. Examples of these tools include web based mail (Gmail), photo sharing (Flickr), social bookmarking systems (del.icio.us), Wikipedia, feeds, and blogs. The Clinical Cases and Images Blog has an introduction to Web 2.0 in Medicine and creating medical presentations for the web and PDAs using free tools. Also see this web based tutorial on subscribing to medical feeds using bloglines. 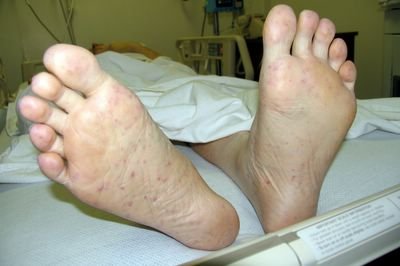 The Department of Halloween
Some hospitals have policies against staff members dressing up for Halloween. In this neonatal intensive care unit, the nurses dress up the babies.
(See Code Blog: Tales of a Nurse.)

An internal medicine resident investigates the historical and medical foundations of zombies and vampires.
(See Antifaust.)

New Vaccine Recommendations
New vaccine recommendations have been released for hepatitis A and pertussis.
(See Aetiology.)

A Case of Mistaken DNA
What happens when your brother, to whom you gave a bone marrow transplant, commits a crime, but your DNA is discovered?
(See the Genetics and Public Health Blog.)

Surgical Treatments for Gastroesophageal Reflux
There are at least two major endoscopic treatments for GERD. Kits for performing one of them, the ENTERYX procedure, were recently recalled by the FDA due to complications.
(See Aggravated DocSurg.)

A large number of pets have diabetes, and their owners care for them.
(See Diabetes Mine.)

Hurricane Relief
Enoch Choi, who previously travelled to Louisiana, is deploying as part of the Department of Health and Human Services Hurricane Relief Program.
(See Medmusings.) Health Insurance
Should in vitro fertilization be covered by health insurance? Perhaps not, argues Insureblog. Healthy Concerns provides another view.

Code Blue for Code Blue
The author argues that the overhead "Code Blue" page for hospital emergencies is archaic and should be stopped.
(See GruntDoc.)

Information Technology
Just in time for Halloween, an IT specialist talks about the theft of medical data.
(See the Healthcare IT Guy.)

Healthcare IT remains prominently in the headlines.
(See Hospital Impact.)

Letter from the Editor
Dr. George Lundberg, the editor of Medscape General Medicine, in a video blog editorial asks "Is there a place for medical blogs in a medical media company?" (The text is here.) Dr. Lundberg argues that the content of blogs has historically existed in many other forms, and he worries about issues of privacy and accuracy. Respectful disagreement is offered by Clinical Cases and Images, DB's Medical Rants, and Steve Hoffman (who worked with Dr. Lundberg at Medscape).

Scientific Advances
A new method for distinguishing between bacterial and viral meningitis has been published.
(See California Medicine Man.)

A novel anti-freeze protein from snow fleas may have a role in preserving organs for transplant.
(See the Biotech Weblog.)

The Cancer Battle
Warfare is an analogy for the practice of oncology.
(See the Cheerful Oncologist.)

Quite possibly, this is the best emergency room nurses' music video ever.
(See GruntDoc.)

Conclusion
That concludes this week's Grand Rounds. Thank you for your submissions.

Next week's Grand Rounds will be hosted at the MSSP Nexus Blog.

Thank you for hosting, and have a great week.

I see, you are leaving the comments with kudos . . .well, delete me again. lol, thank you for hosting.

Great job, Doc! Thanks for utilizing my submission.
Hannah

well done, good to come home and catch up... sorry iwas away and couldn't contribute.

Thank you very much for sharing your thoughts. It is always great pleasure to read your posts.